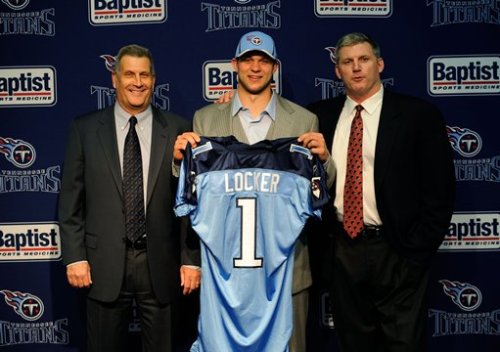 Locker and Munchak have hitched their careers to one another.

When you select a QB at number eight overall, as the Titans did in 2011, you expect that guy to be the future of your franchise. You are banking on him breathing life into a locker room and molding it in his image. The abounding question for the past two off-seasons in Nashville is whether or not the Titans got it right with Locker. “Got it right” may not be the correct phrase, though, because the next three quarterbacks taken in that draft were Blaine Gabbert, Christian Ponder, and Andy Dalton (not mentioning that Kaepernick was taken later in the 2nd round because no one had him going anywhere near the top ten at the time. Also, he looked amazing last year but let’s see what he does with a full season ahead of him).

The most successful of those three has been Andy Dalton, but would you trade him for Jack Locker? Right now? Straight up? Do we believe that Andy Dalton would have had the same success he has experienced thus far if he were drafted by Tennessee at number 8? At the very least, we can argue that Locker, Ponder, Gabbert and Dalton all have similar questions about them going into their respective third years so I don’t believe the Titans organization blew it with their choice.

Still, there is much to prove.

Can new Offensive Coordinator Dowell Loggains play to Locker’s strengths and minimize his weaknesses? With just the eyeball test, you can tell he is not going to command the field with his arm the way Rodgers, Manning, or Brady do; but, his athleticism is undeniable. I imagine him growing into a McNabb type and I don’t think any Titans fan would have a problem with that. Here are Mcnabb’s numbers vs. Locker’s number in their first year starting (both were partial seasons):

It  might be a bit of a stretch to compare those two seasons, but the only point I am illustrating is that not every quality quarterback dominates immediately. McNabb was mobile, had a lot of arm strength, and had some issues with accuracy. Locker certainly has a similar scouting report.

I have faith in Locker if for no other reason than I am a Homer and I know that he is better than Gabbert. But, my fear is that he will be a bit of a late bloomer in regard to commanding his entire skill set as a QB, see Steve McNair. Although, we are all spoiled by the Andrew Luck, Robert Griffin III, and Russell Wilsons of this era, I do not think it is right to demand that level of domination from every young signal-caller. Even special quarterbacks such as those I just listed will go through some growing pains. Cam Newton and Sam Bradford came into the league like gangbusters in their rookie years, but since then the luster of that early domination has worn off a bit and we have seen many questions arise about their abilities going forward (more for Bradford than Newton). Rick Mirer, Vince Young, Byron Leftwich:  all three of these guys looked as if they had a bright future in this leauge during their rookie campaigns only to not live up to the lofty expectations.

If the Titans cannot vie for a playoff spot this year there will undoubtedly be a regime change; and, you can just imagine Locker’s career floundering under a new head coach and coordinator who have no allegiance to him. Jake has got to do enough this year to make the Titans respectable so he can buy another year or two to give himself enough time to come into his own. I am rooting for him to put it all together and to carry his team – a team that has some real talent at the skill positions but glaring deficiencies on defense to a wild card spot.

We are in the right division to make it happen, and the personell upgrades done in the off-season have made it at least plausible.  The Titans need Locker to take two steps forward this year –  one as proof that he is a better quarterback, and another to put himself in front of the 52 men behind him as a leader and as an example.